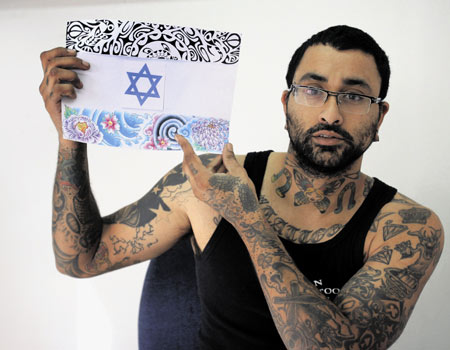 If a Jew gets a tattoo, he or she cannot be buried in a Jewish cemetery. But is that statement a fact, or a myth? And what about Jews who are tattooed unwillingly?

Tattoo artist Kevin Campbell is Jewish. He’s currently tattooing a Jewish-themed image on Brandan Lobenfeld, who is also Jewish. Both believe their Jewish tattoos are a way to celebrate their faith.

“Once I was pretty much covered in tattoos, and the reaction was pretty good,” says Campbell. “Some of the older people at the synagogue would make comments every so often when I’d walk in. I heard some, ‘Oh my God,’ and that kind of stuff.”

Lobenfeld says he often gets lectured about his tattoos from both Jews and non-Jews. “They say you can’t be buried in a Jewish cemetery if you have tattoos. I’m like, yeah I know, but I feel as though if I’m proud of who I am and I should be able to show it off.”

The Orthodox Jewish battle over a N.Y. school system

Need a Shidduch? Devorah Benjamin Has an Idea!