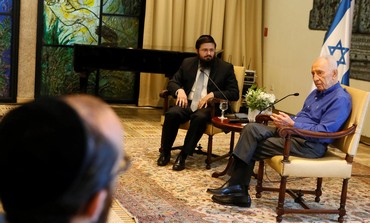 The haredi community is a vital factor in Jewish life  and in the t State of Israel President Shimon Peres told a group of some 60 students from the Mir, Hebron, Ateret Israel and Ponevich yeshovot on Wednesday when they met with him at his official residences. Peres also decried the “dialogue of hate” and the attempts to delegitimize the haredi community in the campaign for shared responsibility.

Peres called on Israeli employers to help integrate haredim into the work force.  The students who are members of A real Friday Night Forum told Peres that  they see the State of Israel as their state and not just the country in which they live and in which they  were born. They felt hurt and humiliated by the vicious insults that had been hurled at the haredi community and the accusations that bordered on delegitimization, they said.

After listening most attentively to what the students had to say, Peres said that it was important to encourage haredi youth to engage in academic as well as religious studies.  There was no conflict between the two he said, if the academic studies were based on professions that they could undertake and thereby improve the economic status of their families.  He cited the Rambam an example of someone who was a great rabbi and at the same time a brilliant physician. Peres also emphasized that there is no contradiction between serving in the army and continuing with Torah studies.

Breaking with tradition, Rockland JCC will open on Saturdays